SGCI, along with seven other sponsors, organized the SC20 co-located virtual hackathon on November 5-9, 2020. Named HPC in the City, the hackathon, which ran 96+ hours, was launched by the SC20 Inclusivity Committee with the purpose of engaging the community in the SC host city, Atlanta. The committee had planned to engage with the many universities, local technical colleges, and state and local government agencies. When SC pivoted to a virtual conference, some of these plans were no longer possible, but the organizers moved forward with the hackathon and offered a successful program in a virtual format. 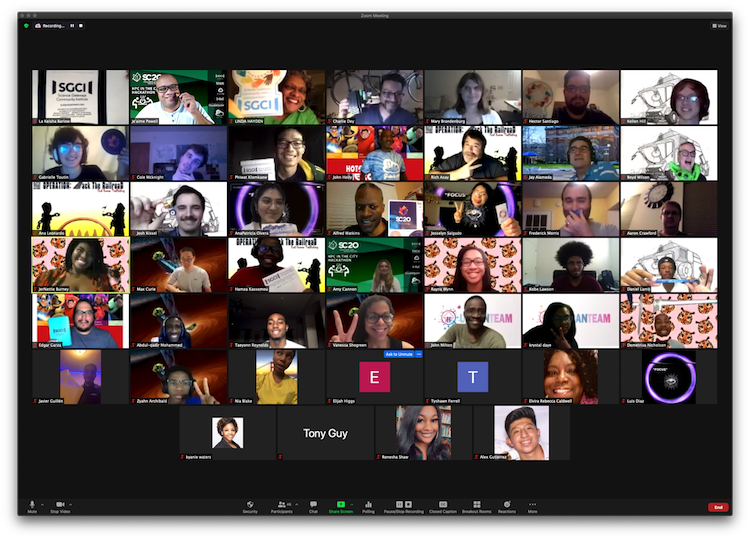 During the event, 63 participants formed nine student teams each with the aide of two mentors, and developed applications to address issues local to Atlanta and more generally to the state of Georgia. Several invited speakers talked to the group including City of Atlanta’s Chief Information Officer Gary Brantley, SC20’s student chair Christine Harvey, as well as financial sponsors of the event: Globus’s Vas Vasiliadis, Google’s Runqiu (Rachel) Cai, and Intel’s Tom Krueger and Nash Palaniswamy. Omnibond being a primary contributor to the event provided several staff members and Boyd Wilson gave a deep dive into their CloudyCluster product and then served as a team mentor and resource to other teams during the event. XSEDE’s own Jay Alameda welcomed the participants as well as SGCI’s Dr. Linda Hayden while also serving as hackathon staff members.

The topics selected by the teams ranged from voter fraud, protest group sentiment analysis based on facial recognition, traffic analysis based on video streams, sex trafficking, and COVID-19 response operations, modeling, and simulation. These were all done utilizing HPC resources including Google Compute Cloud, and CloudyCluster. The results of each team were presented on the final day with deliverables including virtual team photos, presentation slides, demos, and team GitHub repositories. Videos, pictures, code, and presentations can’t be found at http://hackhpc.org/hpc.

Visit Past Hacks for a full list of teams and projects.