We hosted the first SGCI-MolSSI Workshop on Science Gateways for Molecular Scientists at the ACS National Meeting & Expo in New Orleans on March 20, 2018, at the Hilton Riverside right next to the Convention Center. The workshop was attended by 27 on-site participants representing sponsoring institutions, gateways developers, current and potential users, and MolSSI researchers. The talks that were given at this workshop included presentations of gateways that are currently serving the molecular science community as well as some presentations about gateway development technologies and introductions to the services available from SGCI and the Molecular Sciences Software Institute (MolSSI). 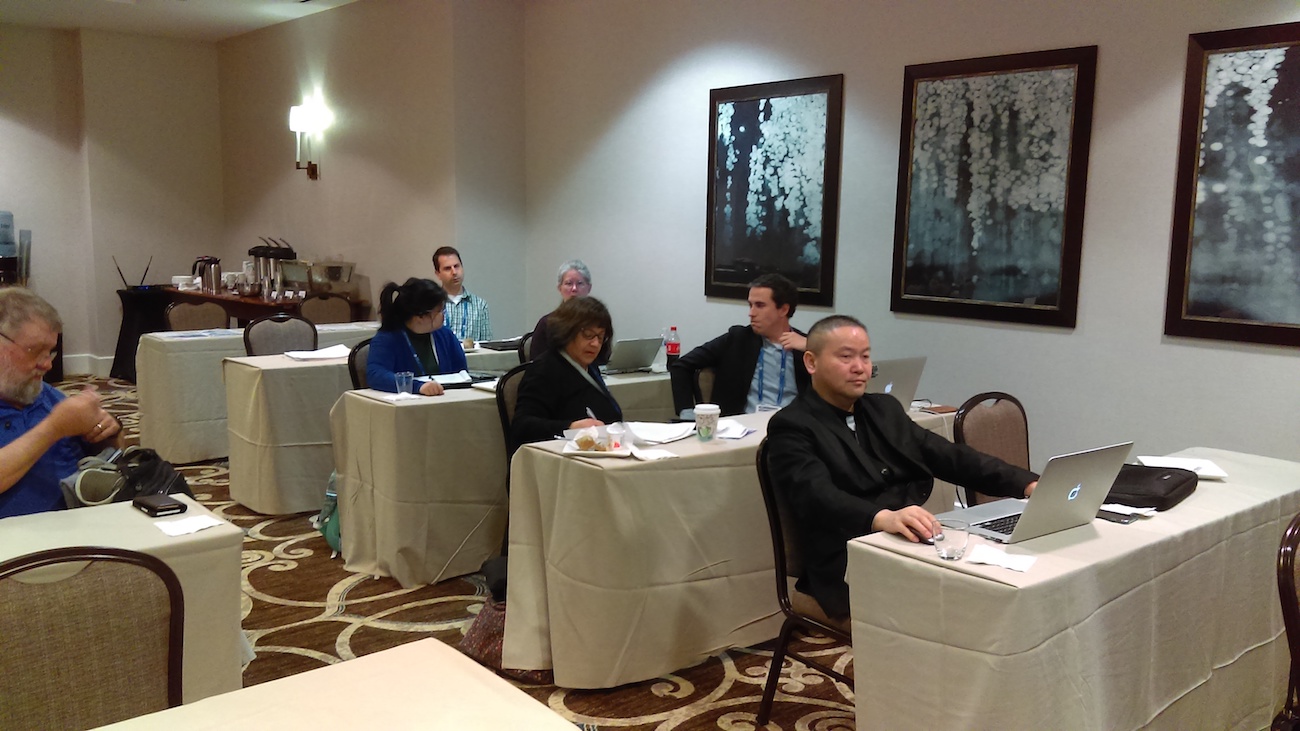 After a brief introduction by Sudhakar Pamidighantam, who is one of the workshop organizers and also SGCI Staff and a Software Engineer at Indiana University Bloomington (IU Bloomington), the keynote address was presented by Yang Zhang from the University of Michigan about the I-TASSER Protein Structure & Functions Predictions gateway. Zhang described the methodology of structure prediction using both information and energy based modeling and how I-TASSER has provided a platform for predicting novel structures for proteins for standard and advanced features.

Next, Nancy Wilkins-Diehr, SGCI Director and Associate Director of the San Diego Supercomputer Center at the University of California, San Diego, presented remotely an overview of SGCI and the services, resources, and engagement opportunities that are available to the science gateways community. Her presentation was followed by one from Paul Saxe, who provided an overview of MolSSI and its mission and goals. Saxe also introduced some MolSSI fellows and scientists and talked about the various workshops, hack-a-thons, and other community engagement opportunities they offer.

After the morning break, Pamidighantam described the SEAGrid science gateway highlighting the long service it has provided to the science and engineering community. This was followed by another remote presentation given by Daniel Dumett Torres from the University of Illinois about some interesting materials projects dealing with topological insulators and ionic structures at Nanoscale.

Mark Perri, Sonoma State University, then provided an overview of the Chem Compute educational gateway which has received support from both SGCI and 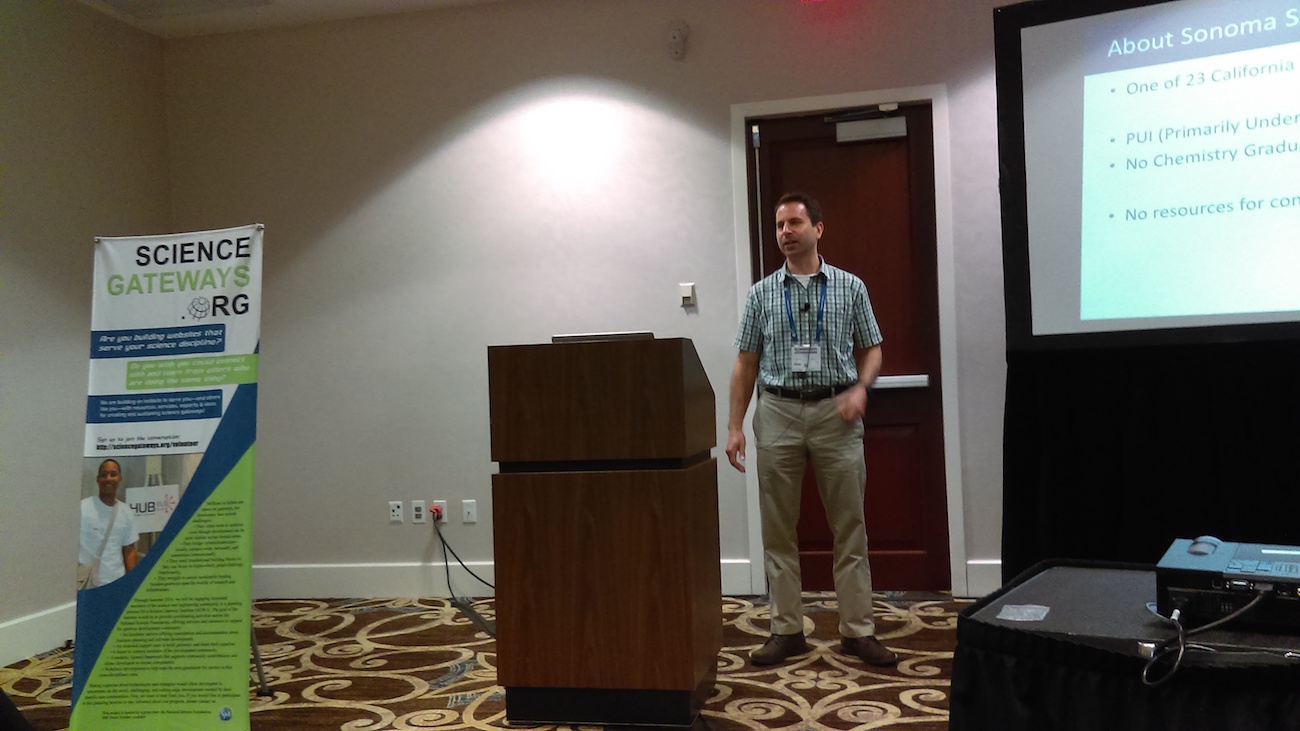 XSEDE. During his presentation, Perri explained how the support he received helped to develop his gateway and, as a result, his teaching, and how the same has been and can be true for others who are at institutions where similar resources and support aren't always available.

During the lunch break, the attending group engaged in lively discussion. Some topics discussed were generic, others formed into small groups and discussed issues for education and support for workflow execution in gateways. Amar Flood, IU Bloomington, used the time to introduce a unique post-doctoral opportunity currently available in Chemistry and Library Sciences at IU during the lunch.

After lunch, Marcus Christie, SGCI Staff and Science Gateway Research Consultant at IU Bloomington, gave a presentation on the Apache Airavata open source framework, describing how it has evolved and the four different types of gateways this multi-tenanted framework can support.

Following the presentation from Christie, Joseph Montoya from the University of California, Berkeley, gave an overview of various aspects of The Materials Project gateway describing applications to multivalent batteries and Auxetic materials. 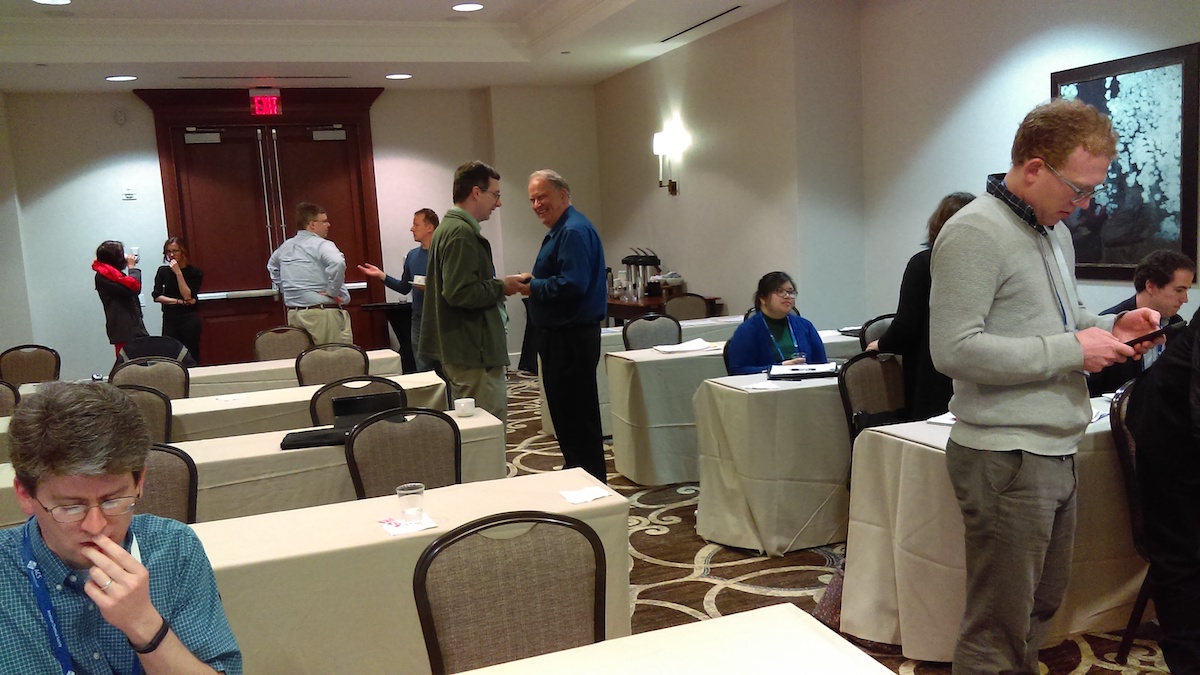 The final session of the afternoon included a hands-on interaction with the SEAGrid gateway where the participants searched the database and selected a molecule to edit and to submit quantum mechanical calculations. Following the hands-on portion, Christie gave a brief description of how a gateway is built using the Apache Airavata open source framework. The workshop concluded with a discussion of the needs of the molecular science community. When the workshop concluded, Pamidighantam and Saxe had extended discussions about how SGCI and MolSSI can further engage with the each other and the communities they serve.

If you're someone who had hoped to attend the workshop but were unable to do so, please feel free to read about the workshop structure and agenda here. Within the agenda are links to presentation slides from each of the presenters.