Explanation of the Airavata tool, Keycloak:

Apache Airavata (an SGCI Affiliate, check the Gateway Catalog to learn more) is middleware that provides abstractions for managing and utilizing computational resources, with an emphasis on running high-performance scientific applications.  Airavata can thus be used to build a science gateway that provides higher-level user interfaces for users to configure, execute, monitor and analyze the outputs of a scientific application. Here are some of the major components in Airavata:

Keycloak is an identity and access management (IAM) server. It handles authentication and authorization of users of an application. Keycloak is an open source project and can be utilized in a number of different ways. For Airavata we use Keycloak to handle

The way it works is that a user logs into PGA via Keycloak (this is generally transparent to the user; they don’t ever “see” Keycloak). Once logged in, Keycloak generates an access token which PGA will then manage on behalf of the logged in user. When the user initiates an action in PGA that requires calling the Airavata API, this access token is sent along in the request and the API server uses the access token to verify the user’s identity and the user’s authorization to use that API method. See the following figure: 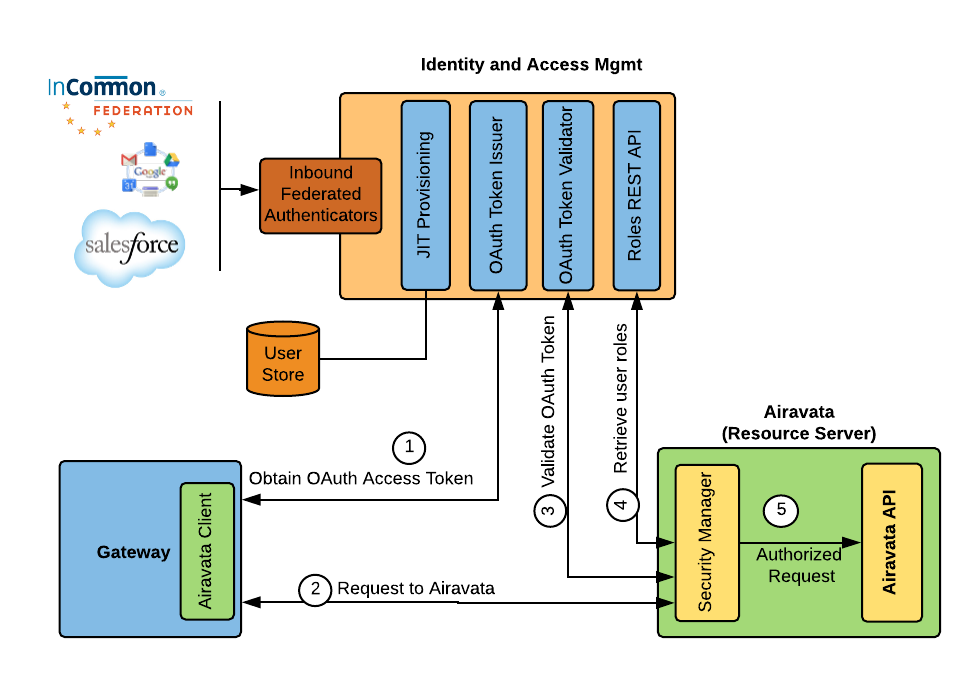 The main impetus for using Keycloak in Airavata is that it integrates very well with other identity providers like CILogon. CILogon is an InCommon project that federates authentication to several different universities and other institutions. By integrating with CILogon we are able to allow users to use their own institutional login credentials to log into PGA. This is important for “campus gateways” which are like science gateways but are more geared toward providing a gateway to a campus’ computational resources to members of that institution.

For a science gateway developer, Keycloak manages user accounts and their passwords so that this functionality doesn’t need to be implemented in the science gateway application itself.  For example, securely storing user password hashes is a tricky problem to get right; it’s nice to be able to lean on a popular third party software like Keycloak to get it right. Keycloak makes it easier to add new identity providers through some configuration in its admin dashboard. For example, if a science gateway wants to provide the option of allowing their users to log in with their Google accounts, that option can be added by a science gateway developer simply by filling out a form in the Keycloak admin dashboard.

How can/has it been implemented by SGCI staff?

We’ve integrated Keycloak as the Identity and Access Management (IAM) service for Apache Airavata. Airavata is used in several science gateways that are supported by the work of SGCI staff.

On the backend we implemented our TenantManagementInterface for Keycloak. This uses the Keycloak REST API to automate creating Keycloak realms (which map to “tenants” in Airavata) and to create and manage users.

On the frontend we implemented a Laravel controller to consume the authorization code in the OpenID Connect flow after Keycloak redirects back to the portal.  This code demonstrates how to exchange the authorization code for an access token and use that token to get the user’s profile from the identity provider (things like first name, last name, email, etc.).

There are a few criteria that we used that caused us to pick Keycloak over some of the other options: